November 11, 2011
Although I enjoy writing this blog – and I hope somebody enjoys reading it, and people don’t just get here by accident – I have never yet got  my act together like other bloggers and written posts ahead of time, ready to post at regular intervals.
However, I think I’ve just realised why. It seems that other people will get a lot of images ready and then drip a few out in a post at a time. Whereas I will prepare lots of images, and post them all at once, leaving me with no images to post the following week. As an example my calendar last year contained 13 images, yet I put them all out in one single post. The same with my ARPS blog post, 15 images all in one go. So in future I will be a little smarter, starting with the pictures from my 2 calendars this year.
I like producing a calendar, as people who would not normally put a picture of a nude up in their house instead put up 13 different ones :) Last year’s calendar produced some interesting stories from people who had a copy, when friends or relatives saw it on their wall, and that’s what I really like getting my images in front on ‘normal’ people and not just other photographers or models.
One calendar is exclusively of Holly, and the other of Raphaella. I could have made 10 more calendars with all the wonderful images I have of other models, but I thought I would try some single model calenders this year.
Now this image of Holly is from an abandoned cottage and I followed a tutorial for an ‘ultra-realistic’ effect from a photo magazine. 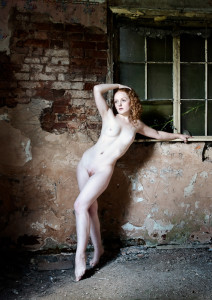 And another of Holly just looking beautiful in natural surroundings. Although I suspect Holly would look beautiful even if I took a picture of her at a rubbish dump or scrapyard – now there’s an idea ;) 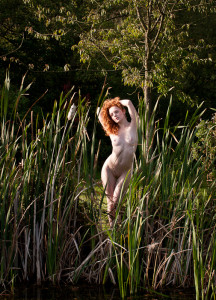 The first one of Raphaella is from the cover of the calendar, and was chosen as it had space for all of the words – as well as being a nice picture. 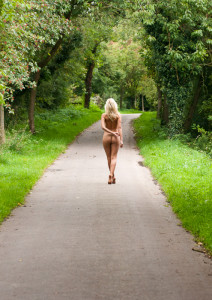 The final image is of Raphaella doing what she does best, making beautiful shapes that just perfectly fit in with the surroundings she is in. I would swear that she is a chameleon. 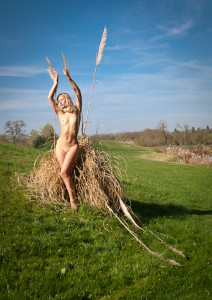 Well that’s 4 images, which is more than enough for a post, and I’ve obviously got loads in reserve so I can make my posts a little more regular over the next few months. And thank you to both models for giving me the opportunity to produce such wonderful images with them.