July 8, 2012
Well I’m back from Brittany after a wonderful time there with Holly. As you probably know I already held her in very high regard, but after our trip she has gone up in my estimation even more. Not taking anything away from all the other great models I work with, in the landscape Holly really is so creative and inspirational.
Well enough gushing about one redhead, and onto another redhead who inspires me, the immensely talented Rebecca Parker. I loved her images from the first time I saw them, after following a link from Holly’s website coincidentally. By an amazing stroke of luck she does not live too far away so we have collaborated together a number of times on shoots.
I often add an extra element to some of my nude shoots, and also have produced some interesting semi-nude images with items of clothing. So last weekend Rebecca took me to the local rag market in Birmingham and helped me choose lots of things I can use in shots. It was a good job I took her as I was attracted to all the sparkly tat, while she helped me chose inexpensive items that will look really good and classy in images.
OK onto a few quick images. This first shot was on the Brittany coast, and Holly and I felt it looked a bit like native American Indian country. Rebecca had put together some strips of feathers and fluffy bits making something that looks a bit like a head-dress, so we used it quite effectively in this shoot. I will probably remove the sea to make it look more like the desert. 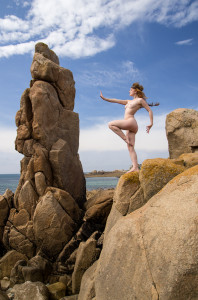 Next we have Holly wearing a beautiful dress she had bought with her, along with two of the hair decorations I bought with Rebecca. They really go together so well, and this was taken in the doorway of the cottage we were staying in. 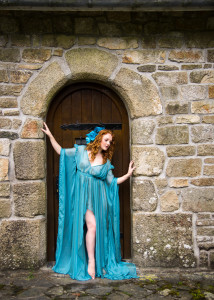 And finally a simple portrait while were sitting in the cottage waiting for the rain to stop outside, when we notice the lovely light coming in through the window. I am now the proud owner of three inexpensive beautiful brooches thanks to Rebecca, and you can see two of them modelled by Holly here. 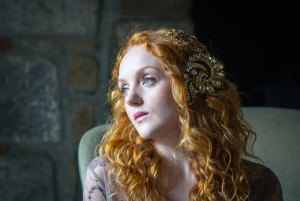 So with my new bag of goodies I look forward to producing lots of new interesting images.
Holly and I also made a useful dent in the backlog of our images while we were away looking through quite a few past shoots which haven’t seen the light of day so far.
You should have noticed a marked ramp up in the production of new images from me recently. The images will also start coming thick and fast from this and other shoots, and I have given Holly permission to pester me for the images we looked through and selected while away, although she did say she was going to start using more extreme measures to get images out of me involving a ‘cattle prod’ :)  You think I’m joking but she has already tried to drown both me and my camera while we in Brittany, so I know what she is capable of, but that’s a story for another day!
A huge thank you to Rebecca for being part of the creative team that made these images possible, and providing inspiration for me. Rebecca and I hope to do a joint photographic exhibition together in the near future, as I think our images while different are very well matched, so watch this space.

These look super. I’m looking forward to more of the shoot with Holly.
As well from Brittany as from Portugal:)