July 19, 2011
I recently went to a lecture by a Birmingham-based professional photographer where he showed some images of models jumping above the Birmingham skyline. I was quite interested in these and so emailed the photographer the following day asking how he had achieved the images. He said that he had simply used a trampoline, and then obviously cropped the image just above the trampoline.
So the following day at work I asked my colleagues at work if anyone had used a trampoline, and amazingly quite a few of them had, as small trampolines or ‘trampettes’ as they are called are used for fitness or are recommended for those recovering from leg injuries. One colleague said that she had a ‘trampette’ in her garage somewhere that she would like to get rid of and had hardly used, so a few days later I became the proud owner of a trampette.
Now I had two shoots coming up with dancers, so I looked forward to using my new found prop to produce some great images. So here’s an image from the first shoot, and if you have to ask who the model is you seriously do need to read some more of my blog entries: 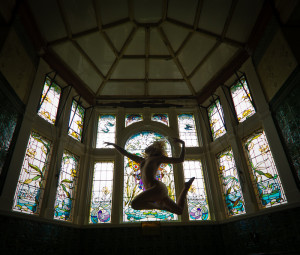 It is of course the beautiful, bouncy Raphaella. She reminds me of ‘Tigger’, as even when you are changing lenses or memory cards she is still jumping around and posing.
Next we have a model I have not shot before, but who I will definitely be shooting again, the lovely Kayleigh Lush. She is an amazingly flexible art-nude model, which would be enough to make me want to shoot with her again, and then to top that she is a dancer. So this is one of the shots we achieved: 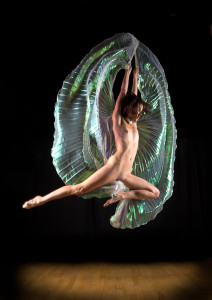 Now the keen-eyed amongst you will see that there is no trampoline in sight. Now my cloning expertise is pretty good, but cloning out a whole trampoline – sorry trampette – is possibly beyond my expertise, and is definitely beyond my patience. No trampette was used in either shot, basically I found that dancers have rubber, springy legs, and have no need for artifical ‘launch aids’. So while my trampette was a relatively cheap prop, it languishes unused in my metaphorical ‘prop bag’. So any offers gratefully accepted :)

And to finish all it needs is for me to thank the two gravity-defying models.

Nice shots. I love the twist at the end! The jumps over a skyline sound fun!

Nice to see a couple of edits of recent shoots Tim.
Rob