July 9, 2011
Twice yesterday I was told off by friends about my blog, first by a follower at work who said it was too ‘nerdy’, by which I think he meant all the stuff about competitions and distinctions, and also by a fellow photographer who said I should post a lot more pictures. She is right as my images are really like an iceberg, 90% of them sit on my disk unseen, while my blog, website, Flickr etc show only around images from 10% of the shoots I have done. So this post is the first step to remedying this.
When people look at photographs they apparently notice contrasts. This can be contrast of colour, tone (dark vs light), sharpness (vs blurred), size (large vs small), saturation or all manner of other contrasts which make objects stand out, and which help lead the viewer’s eye around the image.
So for example in a landscape the photographer must emphasise in some way the part of the image they initially want the viewer to look at, and then using other visual cues lead the viewer’s eyes around the image via the route they choose. Now for the viewer this all happens in an instant when they look at the image, for the photographer this can take hours of painstaking work in Photoshop carefully adjusting parts of the image.
Now a good trick often used by photographers is to include a person in the image, because the human brain puts a lot of its processing power into recognising other humans so the eye will instantly go to the person. Then I usually make sure the subject is nude, as this attracts the eye even more towards the subject as their shape is more well defined, and their body will be all of a similar tone unlike with a clothed subject.

So onto the first example: 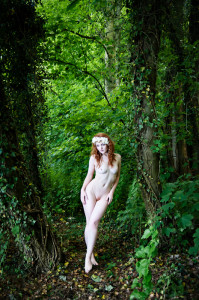 Unless you are obsessively attracted to the colour green or have a fetish about leaves then I’m pretty certain that the first place your eye will go to is the incredibly beautiful Holly. There are lots of reasons she stands out, she’s a fellow human being, she is nude, she is brighter than the background, as well as being a warmer colour (red vs green) which tends to make her come out of the image.  She is also sharper than the background due to me using the largest aperture of my lens.
So overall I think you can see by selecting the location, composition and model I have created quite a large number of contrasts, which really makes her stand out. But herein lies the problem, as a lot of photographers do not go to as much trouble as me, they use messy backgrounds, they use medium apertures so that the background is not out of focus, and apparently some of them even clothe their models :)
Now because this is a digital age, and because so many photographers are too lazy, are not competent,  or just can’t be bothered to follow some simple rules to produce contrast, when you do produce an image with great contrast people instantly think you must have faked it. As is the case with the following image of a great model called Bonnie Scot: 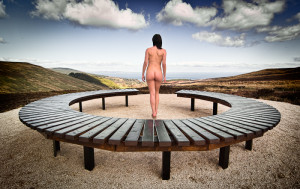 The instant reaction of camera club judges to this image is that there is no way the photographer could have had the good fortune to find such a super bench, with an amazing sky and background, and also happened to have a nude model with them at the time. So therefore it must be fake, and they look for tell tale clues to the author having photoshopped the sky and model into the image. There are none, as this is a perfectly straight image.
Judges are just not able to just appreciate an image for what it is, which is why I prefer producing images for ‘normal’ people who want to appreciate an image rather than dissect it.
I was very recently showing the final image to four people for consideration in using in a panel for a distinction I am applying for later in the year. 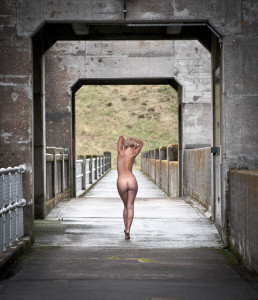 This time the model is the wonderful Raphaellla.
I am using some of the same visual cues to make the model stand out, framing her in the dull concrete arches, her warm tone skin colouring against the background, and I had been lucky in that some earlier rain lightened the floor in the background to make her stand out even more. Again I used my lens at full aperture to make the background unsharp compared to her body which is at the critical point of focus.
The four people – who are all camera club judges as well – said that I shouldn’t use the image as she’s too sharp so the judge would think I had copied her in from another image.
So the moral of this post is don’t bother going to the trouble to take models to interesting locations, and setting up nice clean backgrounds, and using the capabilities of your lens to make the model really stand out in the image, instead be lazy and take a cluttered boring background anywhere really, shoot at F8 or F11 to get this background nice and sharp so that the model blends in to it and was definitely there, as nobody would go to the trouble to photoshop such an uninteresting, uninspiring image, so it must be real.
An alternative moral is to do your own thing, put real effort into getting the most interesting and inspiring locations you can get, and ignore your local camera club judges, as there are out there some other photographers who do make the effort to make great images themseleves and know that other photographers do the same and they are able to recognise your images as such.
I’ll leave it up to you which moral I shall follow. Thanks as always to the superb models, without whom my images would look rather boring, and maybe even appeal to local camera club judges :)